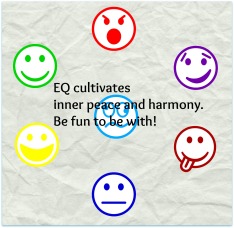 We all have the same pallet of emotional paints. It is how we pigment them on the canvas of life that dictates our artistry. Ged Thompson.

Would you say that the (fictional) people described demonstrate high levels of emotional intelligence?

On a scale of 1 – 10, how would you rate the happiness levels of people who feel this way?

Spinoza said: When a man is prey to his emotions, he is not his own master. I know several people who behave in similar ways to those I have depicted, and not one of them can be said to be his – or her – own master. Not that I’m judging; I’ve been that person who always says ‘yes’ when they really want to say ‘no’. Being a doormat is a codependent trait.

What jolted me out of that particular behaviour was an exchange I had with my dad in which I grumbled about a favour I’d agreed to do for one of my sisters.

At first I was upset by what my dad said, but after reflecting on his words I came to the conclusion that he was right.

Emotional intelligence, then, helps you to transcend your unhealthy/neurotic/wounded ego; it’s about responding to rather than reacting to life. Cultivating EQ helps you to accept what one of my favourite authors, psychotherapist David Richo, calls the ‘givens’ of life: the things we cannot change. (See David’s website for some excellent free resources, including Human Becoming, a collection of excerpts from his inspirational books).

The five givens specified by Dr Richo are:

If we have emotional maturity we are far better equipped to cope well with the unavoidable life events that these givens represent, such as the death of a loved one; the breakdown of a long-term relationship; the job promotion that falls through; the child born with a disability; the betrayal by your best friend.

We have to take 100% responsibility for how we behave in response to the emotions we feel; for example, it is common for abusive partners to blame their victims for their actions: ‘You made me angry because you put too much milk in my coffee.’ The truth is that no-one is forcing an abuser to lash out; they don’t have a gun to their head, just a lack of self-control.

Understanding your emotions is part of knowing yourself – what triggers you and why. When you have this awareness you are in a position to stop yourself being hijacked by inappropriate stressors.

An added bonus to managing your emotions is that it makes you easier to be around; be honest, who would you rather spend time with, a self-pitying whinge-bag or a good-humoured character?

Emotions are contagious; what mood are you spreading?

View all posts by Louise