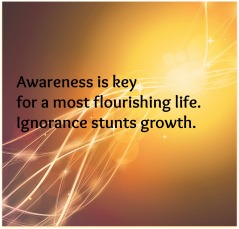 I’m challenging everybody on every side of every divide to be more who they are, to cultivate their capacity for awareness. Jon Kabat-Zinn

I’ve heard it said that awareness is the first rung on the ladder of growth and positive change. Why bother with growth and positive change, you might ask. The answer is that change is unavoidable in life and to welcome it is the path of least resistance. Learning from your experiences helps you to live from your essence. Not only that, reluctance to developing awareness means that you remain in ignorance, in denial; this might seem like a comfortable place to be, but in reality ignorance is not always bliss, it is suffocating.

Let’s put it this way – I’ve never met an unaware person who I could describe as contented. One person who comes to mind, and who claims to live a perfect life, heads for the pub every day after work. Every day. Then spends all day Saturday and Sunday vegetating in front of the television, just staring at the screen, before he showers and heads for … you’ve guessed it – the pub. The same pub. Every day. If that’s his idea of meaningful and fulfilling then fair play to him, but there’s an underlying heaviness to his demeanour that belies his words.

The fitness industry is thriving, and rightly so; you’d have to be living on Uranus to be ignorant of the benefits of keeping physically fit. Yet how many gym-bunnies, I wonder, would run a mile from the awareness that highlights a need for an inner workout? Ditto those who are first in line for the latest iPhone, yet whose eyes would glaze over in bewilderment if you suggested they try an upgrade on a psychological level.

Fear can stop an individual from cultivating their capacity for conscious awareness. Fear of what they might find if they scrutinise their life with a view to deepening their understanding of themselves. Socrates is believed to have said that the unexamined life is not worth living; I’m not sure I’d go that far, but to develop conscious awareness it’s necessary to pay attention to what life might be trying to tell you.

An encounter with a paranoid schizophrenic with psychotic tendencies got my attention, that’s for sure. I could have tried to carry on as though nothing had happened when I eventually freed myself from his (physical) clutches. But I instinctively knew that things could never be quite the same again, and so embarked on a psychological odyssey that would lead to transformation on a deep and satisfying level. I moved through various layers of awareness – from a reluctant acknowledgement of what had happened, spinning through the stages of grief; from denial, to anger, back to denial, through depression, to anger, to denial, to bargaining, depression, anger… you get the picture, until, finally, I was able to settle into acceptance.

Through openness combined with a commitment to personal and spiritual development practices; an educational programme run by my local women’s refuge; then counselling, followed by CBT, I gradually scaled (or is it descended?) levels of awareness concerning the reality of my life experiences until I landed not far short of Abraham Maslow’s ‘self actualisation’ pinnacle; I’m not sure you can ever say you’ve reached the summit. Or maybe you can, but if that’s when it’s time to leap from the peak into another plane of existence then I’m not ready to ‘arrive’ any time soon.

What I can say about being willing to go through any temporary discomfort and develop my awareness is that it has empowered me to become more than I ever previously believed possible. And if I can do it, you can, too.

View all posts by Louise

10 thoughts on “Essential Principles, Practices and Panaceas, A – Z: Awareness”